Okay, handful of readers. I guess now that most if not all networks have announced what shows have been picked up for another season and their new fall programs, I can probably share this little bit of pretty awesome news.

This is great for a variety of reasons – I’ll list five. First, it’s a very interesting show visually, incredibly dynamic and distinct in its style – so that’s going to be fun to bring to life. Second, it has Kerry Washington who is awesome. Third, it’s my first episode on ABC, the network where I began as a directing fellow seven years ago and started my long road to finally directing episodic television. So it’s going to be nice to be coming back to where it all started, in a matter of speaking. Fourth – it shoots in LA, so it will be nice to direct a show in town. And fifth – it’s a show I’ve been watching and enjoying from the start. It’s incredibly addicting with crazy twists and storylines.

That crazy world is created by Shonda Rhimes, who is dominating television these days. She created “Grey’s Anatomy,” “Private Practice” and executive produces “How to Get Away With Murder” and a new show on ABC this fall called “The Catch.” It’s going to be pretty great to work with her and witness her magic touch. Can’t wait to join this new family and to work alongside awesome producer-director (and actor) Tom Verica. It’s going to be so much fun – a lot of work, but a lot of fun.

Not to mention it’s another show like “Law & Order: SVU” that has a major fan following… 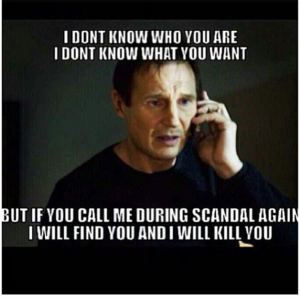 So that’s the big news I’ve been sitting on for a few weeks. Had to wait for the official word that it’s coming back, although that was probably a foregone conclusion. I’m waiting on the possibility of maybe one or two other directing assignments, fingers firmly crossed. For now, I’m incredibly grateful for both “Scandal” and “Grimm” this coming season, so if it ends there that will be a success. I’m also really lucky that these are both shows that I really love and am so honored to be a part of in some small way. Can’t wait until November and January!

Okay, back to writing and preparing to hopefully start a script-for-hire in a matter of days.

2 thoughts on “The Future Looks Scandalous”